The Time Honoured Tradition of Jagadguru

The Time Honoured Tradition of Jagadguru

(known by His devotees as Shri Maharajji)

The original title of Jagadguruttam (‘Greatest Spiritual Teacher of the World’ ) was bestowed upon Shri Kripalu Ji Maharaj on January 14, 1957 by ‘Kashi Vidvat Parishad’ (a council of 500 greatest scholars & saints of India). He composed divine texts like ‘Prem Ras Madira’, ‘Prem Ras Siddhant’ and ‘Radha Govind Geet’ to lead us on the right path of devotion. He also gave priceless monuments as gifts to the world which include  -  Bhakti Mandir located in Bhakti Dham, Mangarh,  Prem Mandir located in Vrindavan Dham, Kirti Mandir located in Barsana Dham. Shri Maharajji also built hospitals for the impoverished, the Jagadguru Kripalu Chikitsalaya in Vrindavan, Jagadguru Kripalu Chikitsalaya in Barsana and another one in Pratapgarh. All three help millions of underprivileged to gain free access to medical care. His Kindergarten, School and College for impoverished girls Jagadguru Kripalu Parishat Education is located in Kunda and provides completely free education.

India has always been and continues to be the spiritual leader of the world. It has been the proud privilege of India to be the birthplace of many great Saints, Sages, thinkers and seers gifted with divine vision. In modern times, however, the prevalence and mushroom growth of so-called gurus in our country is widespread. People who do not know the meaning of the scriptures are beguiling the innocent public. Spirituality across the board is degenerating making it imperative to know who a genuine Guru is i.e. someone who can haul us out of this abyss of darkness. Moreover, India is at risk of losing its seat as the spiritual leader of the world. We need someone to illuminate our spiritual path, to revive true spirituality and revitalize ancient Vedic wisdom, so that the widening generation gap can be bridged and India can continue undisputedly as the spiritual leader. Ochre-robed sanyasis and countless babas, no matter how elaborate their ostentation, cannot fulfil this mission. It is only a God-realised Saint, who can bring about a spiritual revolution through the unification of all cultures and faiths, thereby maintaining India’s esteemed seat of world teacher.

It is difficult for a common person to recognise a true God-realised Saint from observing his outer appearance. All the scholars therefore decided to generate the seat of Jagadguru, so that whoever assumed it could be accepted as a Guru without any doubt. Let us reflect on this time-honoured tradition of Jagadguru.

The word ’Jagadguru’ is very old. In the Mahabharata Arjuna called Shri Krishna, the Jagadguru – krishnam vande jagadgurum. In the Uttar Khand of Skanda Purana, Mother Parvati addressed Lord Shankara as Jagadguru. In the tenth canto of the Bhagavatam (10.90.27) Shukadeva Paramahansa says, “Blessed are those women who accepted Jagadguru Shri Krishna as their beloved.”

Thus, Shri Krishna Himself is the foremost original Jagadguru, “Spiritual Master of the World”. Since ancient times, this tradition of honouring a Saint with the title of Jagadguru began with Jagadguru Shankaracharya (BC 509-477), who was a partial incarnation of Lord Shankara.

In this age of Kali as hypocrisy and fraud continued to grow in leaps and bounds, many people wearing the coloured garb of an ascetic became babas or godmen overnight. Apathetic to the study of the Vedas and Shastras, they instead adopted unscrupulous methods to attract gullible people by initiating them through whispering some mumbo-jumbo into their ears. Consequently, their misguided followers became all the more confused.

Sensing the need of the times, the eminent scholars of the day who represented different branches of knowledge unanimously decided to bestow the title of Jagadguru on a Saint who was proven to be well-versed in the knowledge of the Vedas and Shastras, and who had realised God. Such a person should be able to command the respect and reverence of all the scholars of India. People should feel confident to seek his association and practice devotion under his guidance. A poor family man has no time or means to determine who is genuine and who is not. Therefore, in order to combat this deception for the benefit of all, the practice of honouring a genuine Saint with the title of Jagadguru began.

One has to seek the refuge of a Saint who has both shrotriya and brahmanishtha, i.e. one who is well-versed in the Vedas and Shastras and who has practically realised God He should be able to convey the essence of the vast knowledge contained in the scriptures, and explain it to us simply. For example, what is God? What is jiva? What is maya? How can a seeker attain God realisation? What is worldly happiness? What is the mind and what is the intellect? Only a Saint capable of demystifying these fundamental questions deserves to adorn the position of Jagadguru.

During the time of Shri Shankaracharya there was no assembly of scholars. He travelled the length and breadth of the country, defeating all the renowned scholars who challenged him to scriptural debate, who in turn accepted their defeat declaring him to be supreme amongst all. The story of the defeat of karmakanda pundit and great scholar, Mandan Mishra and his wife Sharda Devi, at the hands of Shri Shankaracharya is well-known.

In accordance with the prevailing sentiments and circumstances of the time, he established the doctrine or philosophy of Advaita or Monism. Though he was essentially a Rasika Saint who practised devotion to Shree Krishna, but his commentaries propaged the philosophy of Advaita, the purpose being to counteract the agnostic philosophy propagated in Buddhism. The establishment of the tradition of Jagadguru during this time helped revive the moribund tenets of Hinduism. With a view to propagate the wisdom of the Vedanta and to preserve national culture, Shri Shankaracharya established four mathas and nominated four of his disciples to carry forward the propagation of the principles of Vedanta as enunciated by him from their respective seats.

The four successors of Jagadguru Shankaracharya, duly nominated by him to head the four mathas, followed the same tradition of Jagadguru and so were called Jagadgurus. The disciples who became their successors were then called Jagadguru too, and this practice has continued. In this way, the person who holds the seat has the title of Jagadguru. Later in the eighteen century a body called Kashi Vidvat Parishat was established in the holy city of Varanasi, comprising approximately 500 of India’s topmost scholars. This esteemed assembly’s collective knowledge represented a variety of spiritual disciplines and scriptures, including the Vedanta and Nyaya, the works of Patanjali and the Vaishehika, the Bhagavad Gita and the Shrimad Bhagavatam, etc. They alone held the authority to determine who should be honoured with the title of Jagadguru.

It was this Kashi Vidvat Parishat who in 1957 invited the young Shri Kripalu Ji Maharaj to speak for ten consecutive days on scriptural philosophy. During his discourses, Shri Kripalu Ji Maharaj quoted thousands of verses from hundreds of scriptures while speaking in fluent Sanskrit. He revealed his profound and unparalleled scholarship of the Vedas, Shastras, Puranas and other scriptures that belied his age of just 34 years. Shri Kripalu Ji Maharaj accepted and proved true the existing philosophies of all previous Jagadgurus, and to the utter amazement of the scholars of Kashi Vidvat Parishat, he also miraculously reconciled their apparent contradictions. In addition, he proved the significance, importance and supremacy of bhakti or devotion as being the essence of all Hindu paths for this age. To this end, he also explained the practical form of nishkam bhakti or selfless devotion, which can be followed by anyone.

Every year, 14 January is celebrated as “Jagadguruttam Divas” in commemoration of this historical event that took place on 14 January 1957 when Shri Kripalu Ji Maharaj was honoured with the unprecedented title of Jagadguruttam, “Supreme Amongst All Jagadgurus” by Kashi Vidvat Parishat.

The elite body of scholars was left spellbound by the extraordinary vastness of Jagadguru Shri Kripalu Ji Maharaj’s knowledge that included all the Vedas and Shastras, which he imparted so judiciously through his erudite lectures in classical Sanskrit.

The four previous Jagadgurus wrote their commentaries and books in Sanskrit, a language far beyond the comprehension of common people today. Reconciling their doctrines, the fifth Jagadguru, Jagadguru Shri Kripalu Ji Maharaj represented the principle of bhaktiyoga, making it applicable to the modern age by attributing universal brotherhood and giving it a positive outlook by propagating the message of love and devotion supported by all the world’s scriptures. 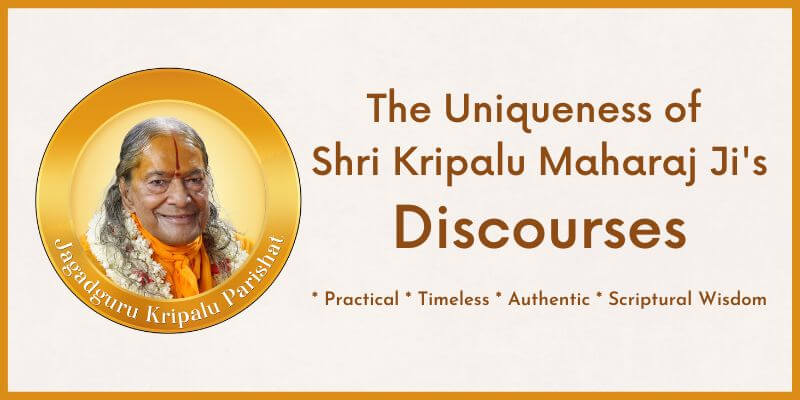 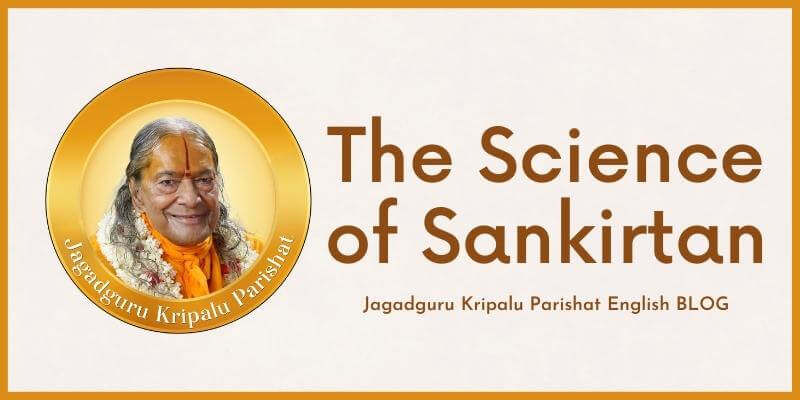 The Science of Sankirtan